Not as intense, but definitely a great read, was Basketball Junkie by Chris Herren. 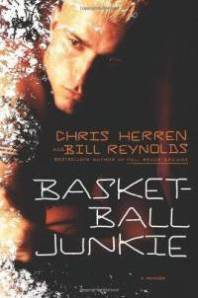 Last November, Chris Herren came to speak at a local high school close to where I live.  I had read about him plenty; I had watched him play when I was younger and read plenty of articles about his drug use.  I had heard his methods during speaking engagements were different (in a good way) and I was really excited to hear him speak.  He did not disappoint.  He was candid and compelling.  As is his book.  An honest portrayal of an addict.  A kid who had every opportunity to be a big star but whose addiction was so controlling, he lost everything.  Just when you think he has hit rock bottom, you realize he still has deeper places to go.  If I hadn’t known he lived, I would have been sure he had died.

Every addict starts out like Chris.  Addicts come in all colors, shapes and sizes.  They live in big houses, small houses, in cars and on the streets.  They have all different degrees, professions and hobbies.  They don’t all get to live to tell their stories.  Chris did and now he is using what he went through and what he learned to tell his story.  If he saves even one person.  Judging by what I have read, he has saved many.  He says it was all worth it.  I am sure if he had the chance to do it again, he wouldn’t have taken the path he did (would anyone?) but I admire him for turning something horrific into something worthy.

If you know someone fighting addiction and want an inside look and the life of an addict, this is a good place to start.  I was touched by addiction late in my teen years, when my best friend died of an accidental overdose.  That was almost 14 years ago and that never gets easier to say.  I didn’t grow up around drugs, I wasn’t a part of that crowd and I was so naive, I didn’t even know my friend was doing it.  It was a huge shock.  Sometimes, it still shocks me.  Only because I never could have imagined how the war on drugs would personally affect me, how out of control it would get and I could never have imagined how insensitive some people could be about addiction.  No one grows up wanting to be an addict.  For me, reading this book and other books like this, helps me to understand where my friend was and what he was going through during his addiction.  I am working on a post all about addiction and my friend, that closely ties to this post.

Are you drawn to books about anything specific?  Do you feel like you identify with any specific genre?